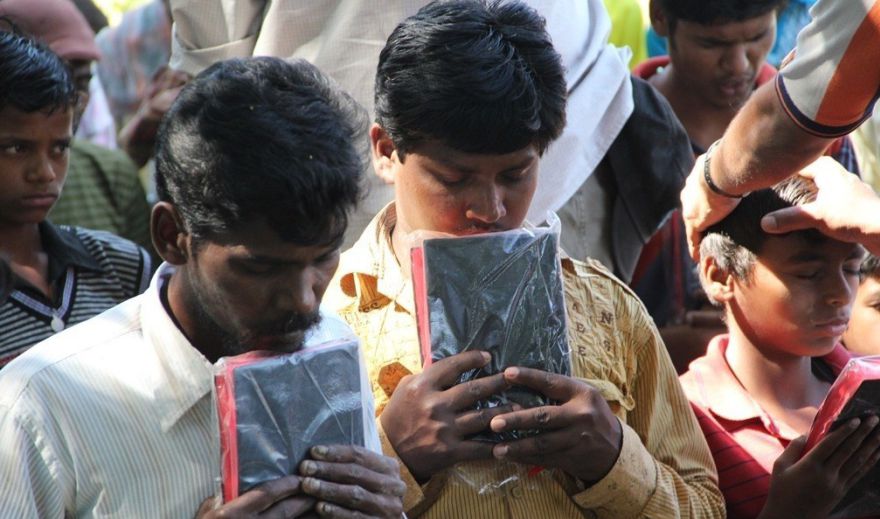 Being Ambassadors for the Kingdom of God

For most of us in the western Europe or Americas the Bible is as ubiquitous as a loaf of bread. And, maybe, as so often with the bread, we feel that we had enough and ignore it for days. However in many parts of the world, in special in Asia and Africa, the Bible, like bread, is hard to find, or non-existent, though multitudes need it and desire it. Y4K partnered with local ministers in both Asian and African countries to procure, ship and distribute hundreds or thousands of Bibles in local languages. To complement the distribution of literature , Y4K partnered with other organizations to sponsor and participate in pastoral training conferences and evangelistic events to both encourage and equip the local ministers and believers. Teaming with locals in sharing the Gospel, the good news that every person can find salvation through the Lord Jesus Christ, made us more aware to the outstanding efforts the body of Christ makes in many locations of the world despite hardships and obstacles.

The evangelistic methods covered the whole spectrum from preaching in churches to handing our tracts on the street and having services in parks and on the streets.

Y4K is actively seeking to help believers that are remote from the beaten path, which are not visited often, especially those in rural areas. In such places it is not uncommon to see scarcity and adversity. With what the Lord entrusted us we sought to meet as many needs as possible, so that from distributing food packages in Africa, to sponsoring training of widows in India and buying sowing machines for them we tried to stretch the resources to maximum efficiency.

From the discussions with our brother Quintino, we learned that he did not have a church in his village. At that time there were thirteen people who turned their lives to follow our Lord Jesus Christ in Paunca. God communicated clearly to us that we need to build a church in Paunca.  When we told Quintino what God made known to us, he rejoiced and shared that he and his fellow believers in his village actually have the property where the church can be built. The property was obtained through a donation by the village leaders. Right then, we felt lead by God to walk over to the land where we prayed and dedicated the property to be the new place of worship in Paunca.

At that time when God has laid it on our hearts about building a church in Paunca, we had no money.  All we had was just the message from God to build the church.  We told Pastor Quintino the situation and we put our trust in God and believed that if God spoke, then He will provide the funds and send the right people to help.  Within two weeks of our return to America, we received the funds to build the church.  We immediately sent the money to Quintino and the work started. What was surprising to hear is that the building of the church it became a village project and all the labor put in came from voluntary work even from children who were so eager to help that they gathered the sand required to make all the bricks for the foundation.

The building for the radio station was completed and it is functioning since 2012. Local pastors are broadcasting the message of the Gospel in the native languages every week.